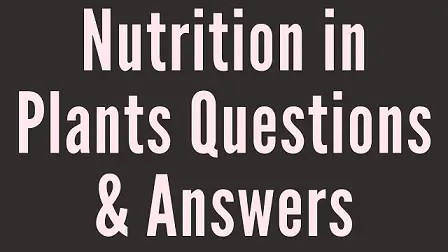 Hi Everyone!! This article will share Nutrition In Plants Questions & Answers.

Made of cells and tissues, plants just like animals breathe, grow, circulate materials and reproduce but they are remarkable in their own way. They are unique in their nutrition as well as most of them show the autotrophic mode of nutrition. Below are given Nutrition in Plants questions and answers. I have also shared Nutrition In Animals Questions & Answers so, you can check that post as well.

Question 1: What is nutrition and what are its different modes?

Question 2: What is autotrophic nutrition?

Answer:  Auto means self and trophic means to feed. Autotrophic nutrition is a mode of nutrition in which an organism produces its own food from simple raw materials.

Question 3: What is heterotrophic nutrition?

Answer: Hetero means another and trophic means to feed. Heterotrophic nutrition is a mode of nutrition in which a living organism obtains its food by digesting organic compounds prepared by other plants or animal tissues. This is because they cannot synthesize their own food.

Answer: The word Photo means light and synthesis means to prepare. Photosynthesis is the process by which green plants make their food, from carbon dioxide and water in the presence of chlorophyll by using light energy from the sun. The food prepared by the plants is in the form of simple sugar (glucose) which is then transported to other parts of the plant and are used as a source of energy to carry out various internal reactions. The excess glucose is stored in the form of starch in the leaves.

The materials required for photosynthesis are – carbon dioxide, water, sunlight and chlorophyll.

Question 5: What are the reactants and products of photosynthesis?

Question 6: Name the pigment which gives the green colour to plants. Explain its role in photosynthesis.

Answer: Chlorophyll. It traps the light energy of the Sun and converts carbon dioxide and water into glucose and oxygen.

Question 7: How does carbon dioxide enter the plant?

Answer: The carbon dioxide enters the plant through small openings present on the leaves called as stomata.

There are three types of heterotrophic plants –

Question 9: What do you mean by a parasite and host?

Answer: An organism that lives in or on another organism to derive some or all of its nutrition is called parasite. The organism on which the parasite lives is called the host.

Answer: The two type of parasitic plants are:

Question 11: What are saprotrophs?

Question 12: What are Partial parasites? Give example.

Answer: There are some parasitic plants that are photosynthetic but depend on the host only for water and minerals. Such plants are called partial parasites. These are also known as hemi-parasites.

Question 13: What are Total parasites? Give example.

Answer: There are some parasitic plants that depend completely on the host for minerals, sugar and water. Such plants are called total parasites.

Question 14: What are sucking roots or haustoria?

Question 15: What are insectivorous plants? Give three examples.

Answer: Insectivorous plants are the plants that derive nutrients by trapping and consuming insects. These plants are also called carnivorous plants as they grow in mineral-deficient soils, especially nitrogen so, to meet their nutritional needs, they rely on animals (insects).

Two examples of insectivorous plants are:

Question 16: What is meant by symbiotic relationship?

Answer: Some organisms live in association with other plants or animals to obtain their nutrition from them. This association is called symbiotic relationship where both the organisms involved are benefitted.

Some examples of symbiotic plants are:

Question 17: What are Mycorrhizae?

Answer: Mycorrhizae or fungus roots showsymbiotic relationships of plants and fungi where fungi grow on the surface of the roots of the host plants. In this association, the fungus gets sugar from the plant. In return, the fungus supplies the plant with phosphate and other minerals absorbed from the soil and also increases the surface area for water uptake.

Question 18: How does soil regain its lost nutrients?

Answer: When living organisms like plants and animals die, certain organisms present in the soil break down the complex organic molecules and release simple nutrients back into the soil. That is how soil regains its lost nutrients.

Question 19: What are decomposers? Explain the two types of decomposers.

Answer: Decomposers are the organisms that break down or decompose the complex organic matter to release nutrients.

The two types of decomposers are –

1. Detritivores: These are the organisms that ingest the dead organic matter to release simple nutrients back into the soil. For example – Earthworms and Dung Beetles.

2. Saprotrophs: These are the organisms that digest the dead organic matter externally by secreting digestive enzymes onto the organic matter. For example – Fungi and Bacteria.

Answer: Most insectivorous plants grow in soil deficient in minerals especially nitrogen. Thus, to meet their nutritional requirements they rely on insects.

Question 21: How do leguminous plants enrich the soil?

Question 22: What would happen if the leaves of a plant are coated with Vaseline?

Answer: The rate of photosynthesis will reduce as the stomata are covered in Vaseline. There will be no exchange of gases. Carbon dioxide will not be taken in. After a few days, the plant may die due to lack of food.

Question 23: Before conducting the experiment to prove the necessity of carbon dioxide for photosynthesis, Neha kept his plant in the dark for 48 hours. Can you justify Neha’s actions?

Answer: Neha kept the plant in the dark to de-starch it. It is important to de-starch the plant because when he will carry out the experiment to show that carbon dioxide is necessary for photosynthesis he will have to check the production of starch. Since the plant is de-starched there is no starch left in the plant and any positive test will indicate that starch is newly synthesized.

Question 24: Justify: The inner side of the jar-shaped leaf of the pitcher plant has stiff hair-like structures.

Answer: The hair-like structures present inside the jar-shaped leaf, once disturbed, close the opening of the pitcher by lowering the flap and the insect gets trapped inside.

Question 25: Give one example for Myco-heterotrophic plants.

Question 26: Classify the following plants, based on their mode of nutrition:

Question 27: State the similarities between the following:

(a) Venus flytrap and Pitcher plant

Answer: Both are carnivorous plants and in both the leaves are modified to catch insects.

(b) Detrivores and Saprotrophs

Question 28: Which important nutrients needed by the plants are present in fertilisers and manures?

Question 29: How does the sundew plant obtain nutrition?

Answer: The sundew plants have numerous tentacles with drops of sticky substance at their ends. The insect gets stuck and entangled in the sticky substance. Later on, it is digested by the plant.

In the following questions, two statements are given-one labelled Assertion (A) and the other labelled Reason (R). Read the statements carefully and choose the correct alternative (A), (B), (C) and (D) as given below.

(A) Both A and R are true and R is correct explanation of the assertion.

(B) Both A and R are true but R is not the correct explanation of the assertion.

1. Assertion: The food synthesized by green plants is in the form of glucose.

Reason: The excess glucose is stored in the form of starch in the leaves.

Answer: Tisha and her friends are justified in being concerned. Eyebright and witchweed are parasitic plants. They affect the growth of crops and cause huge economic losses if not controlled.

Question 32: What would happen if bacteria such as Rhizobium disappeared from our planet?

Answer: If Rhizobium disappeared from our planet, most plants will not be able to absorb the nitrogen from the atmosphere as these bacteria help in converting the atmospheric nitrogen into soluble nitrogenous substances. Thus, most plants may eventually wilt/die/not grow.

Question 35: In the following questions two statements Assertion and Reason are given. Use the following options to choose an appropriate answer.

A. Both Assertion and Reason are true and the Reason is a correct explanation of the Assertion.

B. Both Assertion and Reason are true but Reason is not a correct explanation of the Assertion.

C. Assertion is true but the Reason is false.

D. Both Assertion and Reason are false.

Reason: Autotrophs are the ultimate source of food for all heterotrophic organisms.

Question 36: How will you test for the presence of starch in a leaf?

Answer: The leaf is first boiled in water and then in alcohol using a water bath. Then the leaf is washed carefully with water. Finally, drops of iodine solution are put on the leaf to see the colour change. A positive test will show a blue-black coloration on the addition of iodine.

Diksha wanted to grow a plant at home so, she purchased a potted plant from the nursery and kept it away from the window of her room. She watered the plant daily however, noticed that it wasn’t growing properly. She asked her father for advice and he adviced her to keep the plant in balcony. She did the same and after a few days found that the plant was growing properly.

(a) What could be the possible reasons for the plant to not grow initially?

Answer: The plant was kept in one corner of the room away from the window, it would not be receiving adequate sunlight.

(b) Why do you think Diksha’s father asked her to keep the plant in the balcony?

Answer: So that it receives the sunlight necessary for photosynthesis.

(c) What qualities were shown by Diksha?

Question 38: Answer the following in one word or one sentence.

(a) The modified sucking roots in parasitic plants – Haustoria

(e) The symbiotic association between plants and fungi – Mycorrhizae

Question 39: State whether the following statements are True [T] or False [F].

(a) Plants store excess glucose in the form of starch – True

(b) All plants are autotrophic – False

(e) Association between two organisms, in which one benefits at the cost of the other is called parasitism – True

Question 40: Fill in the blanks:

(a) Rhizobium are found living in the roots of plants such as gram, pea and beans.

(b) The mode of taking food by an organism and its utilization by the body is called nutrition.

(c) Fungi is an example of saprotroph.

(e) Lichens are formed by symbiotic relationship between algae and fungi.

So, these were Nutrition In Plants Questions & Answers.