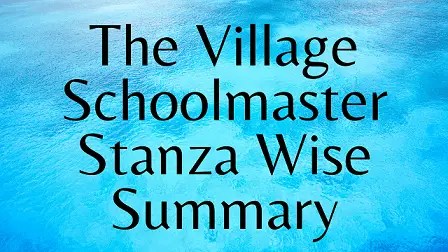 Hi Everyone!! This article will share The Village Schoolmaster Stanza Wise Summary.

Written by Oliver Goldsmith, the poem describes a schoolmaster and his great qualities. It conveys the poet’s respect and admiration for his erstwhile educator. I have already shared The Village Schoolmaster Questions & Answers so, you can check that post as well.

“Beside yon straggling fence………………disasters in his morning face.”

In a small village, the village schoolmaster used to run his little school. It was situated next to the irregular fence that fringed the village path with full blossomed, beautiful but ornamental flowers. He was not only a very strict disciplinarian but also a severe person to observe. He was familiar to the poet and all other absentees because they had suffered the master’s anger. His face was to be carefully examined. The trembling students would gauge his mood by merely looking at his expressions at the start of the day. The day’s misfortunes were written on his forehead or in between the eyebrows.

The schoolmaster was a contradiction. Although he was stern, he was kind and good-humoured. He had a store of jokes that he used to tell his students. Even if the students did not feel like laughing at those jokes yet they pretended to be happy or merry to impress their teacher. If the children observed a frown on his forehead, they circulated the gloomy news throughout the classroom in an undertone. But he was, in essence, a kind man. If at all he had any fault, it was his intense love for learning. He wanted his pupils to become genuine scholars and hence, he had to be demanding with them.

The villagers were unanimous in their opinion that he really was a learned and an extremely knowledgeable man. He could write and calculate too. He could also survey land, forecast weather and tides. The parson approved of his skill in debate.

The schoolmaster would keep on arguing even if defeated. He would fling booming words at his adversary and the villagers would be convinced that he was establishing his standpoint very thoroughly. They stood round the two debaters and witnessed the verbal duel. They were in awe of the schoolmaster when they heard the high-sounding and incomprehensible words used by him. They wondered how his small head could keep that enormous hoard of knowledge.

So, this was The Village Schoolmaster Stanza Wise Summary.