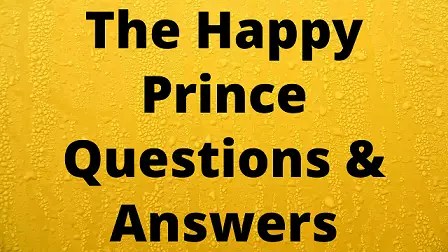 Hi Everyone!! This article will share The Happy Prince Questions & Answers.

The story is written by Oscar Wilde and is about a statue, the Happy Prince, who is covered with gold and sits overlooking the city. One day a swallow bird discovers the prince not happy, but sad. Below are given the questions & answers of this story. I have also shared The Merchant Of Venice Questions & Answers and Turning Your Sorrows Into Joy Questions & Answers so, make sure to check these posts as well.

Question 1: Where did the statue of the Happy Prince stand?

Answer: The statue of the Happy Prince stood on a high platform, overlooking the city.

Question 2: How was the statue decorated?

Answer: The statue of the happy prince was covered with thin layers of gold. There were two bright, shining sapphire stones instead of eyeballs. A bright ruby stone was placed in the handle of his sword.

Question 3: Where was the swallow flying? Why?

Answer: The Swallow was flying towards the city, as he decided to meet his relatives in Egypt.

Question 4: Why did the Swallow put up between the feet of the Happy Prince?

Answer: The Swallow put up between the feet of the Happy Prince because there was plenty of fresh air and it was a fine place for him.

Question 5: Why does the Swallow say that he had a golden bedroom?

Answer: The swallow said so because he took shelter in between the feet of the happy prince that was covered with gold. So, the bird was surrounded by gold all around.

Question 6: Why did the swallow think that the statue was useless?

Answer: The swallow thought so because it was not able to protect it from the rain. So, he thought he should not sleep under the statue.

Question 7: Where were the drops coming from?

Answer: The drops were the tears that were running down from the eyes of the Happy Prince and filled the swallow with pity.

Question 8: Why was the Happy Prince crying?

Answer: The Happy Prince was crying to see the ugliness and misery of his city.

Question 9: Why was the Prince called ‘The Happy Prince’?

Answer: The Prince had everything he wanted, he never dreamt of crying for anything and so he was called ‘The Happy Prince’.

Question 10: Why do the courtiers called the prince ‘the Happy Prince’?

Answer: When the prince was alive, at that time he was not aware of what tears were and what sorrow was. He used to live in a palace where there was happiness all around.  All the courtiers used to call him Happy Prince because he used to be happy all the time and he had not seen sorrow at all.

Question 11: Why was ‘Happy Prince’ not really happy?

Answer: The ‘Happy Prince’ was not really happy because when he was alive, he never got a chance to witness the misery and plight of his people. Now, when he was dead, his statue was placed on a pedestal from where he could see the ugliness of the city. He could see hunger, want, pain and sufferings all around. Though, his heart was made of lead, he could not help but weep at this sight.

Question 12: What did the Happy Prince request the swallow to do? Why do you think he did this?

Answer: The Happy Prince was standing on a tall column and could easily see the ugliness and misery. He requested the swallow to stay with him and be his messenger in helping the needy with the gold and gems from his statue.

Question 13: Why does the Happy Prince send a Ruby for the seamstress?

Answer: The Happy Prince sent the Ruby of his sword to the seamstress because she was very poor and had no money. Her face was thin and her hands were rough and had become red because they had been pricked by the needle. This was because she was a seamstress and was embroidering flowers on a gown of the Queen’s maid who would walk along with the queen during the court ball. Her little son was suffering from fever and was asking for oranges but she had nothing to offer but river water which he didn’t like to have. The Prince felt pity and so, he offered the Ruby to the seamstress so that she could afford to treat her son and live comfortably.

Question 14: Why did the swallow stay back with the Happy Prince? Do you think he did the right thing?

Answer: The Swallow was kind-hearted and so stayed back with the lonely Prince out of pity and compassion. The Prince was helping all those he could but the swallow brought disaster upon himself knowing well that he could not withstand (tolerate) the cold winter. The Prince also did not realize that he was being harsh on the swallow.

Question 15: For whom does the Prince give away his eyes and why?

Answer: The Prince gave away his eyes which were made of very precious and rare sapphire stones to the young student in a garret and the match-girl because of the following reasons.

In the town, the young man who was an aspiring playwright was seen in a garret leaning over a desk covered with papers. He was unable to finish writing a play for the director of the theatre because he was too cold to write and hunger had made him faint. After seeing the young man’s suffering, the Prince commanded the swallow to give his sapphire eyes to the young student to end his miserable days.

The second sapphire eye was given to the match girl whose matches fell in the gutter and were all spoiled. If she did not bring home some money in exchange for the matches then, her father would beat her. She didn’t shoes and stocking and her little head was bared. Moved by her sorrow and suffering, the prince ordered the little swallow to pluck out his other eye and hand it to her as she would be able to get enough money for her family.

Question 16: ‘It is curious,’ he remarked, ‘but I feel quite warm now, Although it is so cold.’ Who said this and why?

Answer: The Swallow said these words after he had delivered the ruby from the sword of the Prince to a poor seamstress. He felt warm because he did a good deed.

Question 17: When did the Swallow decide to stay with the Prince forever?

Answer: The Happy Prince asked the swallow to give the sapphires from its eyes to the playwright and the match girl. The swallow felt that the Prince had become blind and hence would need him now.

Question 18: What did the swallow do when winter set in?

Answer: When winter set in, the swallow used to go to the bakery where the baker used to bake the bread, to eat the bread crumbs and tried to keep himself warm by flapping his wings.

Question 19: Why did the Mayor and the Councillors decide to pull down the statue?

Answer: The statue had lost the gold leaves covering it and also the sparkling jewels in its eyes and in the sword hilt. It was looking unattractive so, the Mayor and the Councillors decided to pull down the statue.

Question 20: Why did the Angel choose the lead heart and the dead bird?

Answer: The Angel chose the lead heart and the dead bird because the two had helped the needy without regard to their own selves.

Question 21: Do you think this story has a sad ending?  According to you, why did the author gave the story a sad ending?

Answer: The story has a sad ending and the author gave a sad ending to show the ultimate sacrifice of the Prince and swallow while helping others.

Question 22: What happened to the statue and the swallow in the end?

Answer: Both the Happy Prince and the bird became good friends and the bird loved the Prince because for his kindness. So, he decided not to away. However, when the winter came in, the little bird felt cold yet, he decided not to leave the Prince and died one day. As soon as the bird died, the heart of the Prince broke into two pieces because of the death of his beloved bird. The next day, the statue of the Price was pulled down and was melted in a furnace. But, hi heart which was made up of lead didn’t melt and was thrown into a heap where the dead body of the swallow was also lying. God sent his angel to bring the two most precious things from the city and the angel brought him the dead body of the swallow and the leaden heart of the Prince.

So, these were The Happy Prince Questions & Answers.