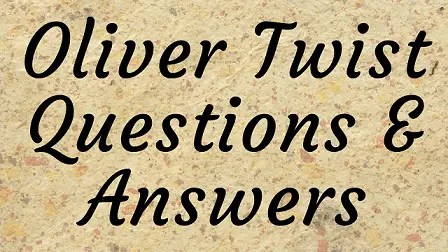 Hi Everyone!! This article will share Oliver Twist Questions & Answers.

Written by Charles Dickens, it is the story of a young orphan, Oliver, and his attempts to stay good in a society that refuses to help. Below are given its questions and answers. I have also shared The Happy Prince Questions & Answers and Turning Your Sorrows Into Joy Questions & Answers so, make sure to check these posts as well.

Question 1: Where did Oliver live?

Answer: Oliver lived in a workhouse run by Bumble the Beadle.

Question 2: Where were the boys fed?

Answer: The boys were fed in a large stone hall.

Question 3: What were the boys given for their meals?

Answer: The boys were given one ounce of gruel in a small porringer (small cup).

Question 4: What did Oliver want ‘some more’ of?

Answer: Oliver wanted “some more” of the gruel.

Question 5: Whom did the tall boy threaten to ‘eat’?

Answer: The tall boy threatened to eat the boy, he was sleeping next to.

Question 6: Why did the boys fear and believe the tall boy?

Answer: All the boys feared and believed the tall boy because he had a wild hungry eye.

Question 7: What was Oliver’s job at regular workhouse?

Question 8: Who was the chairman of the Board of Guardians for the workhouse?

Answer: Limbkins was the chairman of the Board of Guardians for the workhouse.

Question 9: Who used to take out gruel from the copper during mealtimes?

Answer: The master dressed in an apron, helped by one or two women used to ladle out gruel from the copper during mealtimes.

Question 10: How much of gruel each boy used to get?

Answer: Each boy used to get one ounce of gruel every day but on festive occasions, they used to get two ounces of gruel and a quarter of bread.

Question 11: Describe the kind of food that was served at the workhouse.

Answer: Each boy in the workhouse had one porringer and was served only one ounce of gruel, except on festive occasions when they were served two ounces of gruel and a quarter of bread.

Question 12: Why was Oliver punished so badly for having asked for more gruel?

Answer: Mr. Bumble and the Workhouse Board wanted to ensure that the other boys never dare to ask for more gruel.

Question 13: Why was the council called?

Answer: A council was called to decide that boys would ask the master for more gruel and Oliver was given the responsibility.

Question 14: Why did the boys wink at Oliver after the meal?

Answer: The boys winked at Oliver after the meal because he was selected to ask the master for more gruel by the council and that was the time to ask it.

Question 15: How did the boys react to the meal served to them?

Answer: The poor, hungry boys wolfed down the gruel, in such a manner that the bowls always seemed smooth and never really needed any washing. After finishing their meal they would sit and stare eagerly at the copper as they were still hungry and suck their fingers so that not a single morsel would be missed.

Question 16: Why did the boys keep on staring eagerly at the copper after finishing their meal?

Answer: The boys used to keep on staring eagerly at the copper after finishing their meal in the hope that by this action, they could conjure up more servings.

Question 17: Why did the boys at the workhouse have very clean bowls that needed no washing?

Answer: After a hard day’s work, the hungry boys used to wolf down the gruel. With such meager portions, they used to quickly polish off the gruel so, the bowls always seemed smooth and never needed any washing.

Question 18: How and why did Oliver decide to ask for an extra helping of gruel?

Answer: One day, a tall boy threatened to eat the boy he slept next to, if he did not get an extra basin of gruel. All the other boys got scared and decided that one boy would stand up and ask for more food. Thus, lots were drawn and Oliver was selected to ask for an extra basin of gruel. That evening, after eating their serving of gruel, the boys whispered and winked at Oliver while his neighbours nudged him. So, Oliver, approached the master and asked for more gruel.

Question 19: When Oliver asked for some more gruel, how did the master react?

Answer: The master was shocked and stared in surprise at Oliver. He clung to the copper for support. When Oliver repeated the request, he gave a blow on Oliver’s head with the ladle. He then held him by the arm and cried out for the beadle.

Question 20: Why has Dickens called Oliver ‘the small rebel’?

Answer: Dickens has called Oliver a ‘small rebel’ for the following reasons –

(a) Oliver was a very small boy (eight years old), yet he asked for his right to eat proper food.

(b) He broke the unwritten rule of ‘not asking for extra food in spite of being hungry and starved’. The Board and officers felt that he had questioned their control over the boys.

Question 21: Describe the reaction of the board, when Mr. Bumble told them about Oliver’s act.

Answer: The Board was in a meeting when Mr. Bumble narrated Oliver’s act. Mr. Limbkins questioned Mr. Bumble again and again. Then Oliver was put into instant confinement and the next day they posted a bill at the gate of the workhouse, offering five pounds to anyone who would take Oliver Twist as an apprentice for any business, trade or calling.

Question 22: Why do you think Oliver was taken to the work house at the age of 9?

Answer: It was the age at which pauper (poor) children were required to start to work.

Question 23: Why was Oliver punished so badly for having asked for some more gruel?

Answer: Mr. Bumble and the workhouse board wanted to ensure the other boys were too scared to ask for more so, Oliver was punished so badly for having asked for some more gruel.

Question 24: What opinion do you form of the place and people which houses Oliver Twist?

Answer: Oliver Twist and his friends have been kept in a very shabby manner, with little to eat. The place resembles a prison and the man with the ladle in the hand has been depicted as an authoritative figure with little sympathy for the children.

So, these were Oliver Twist Questions & Answers.