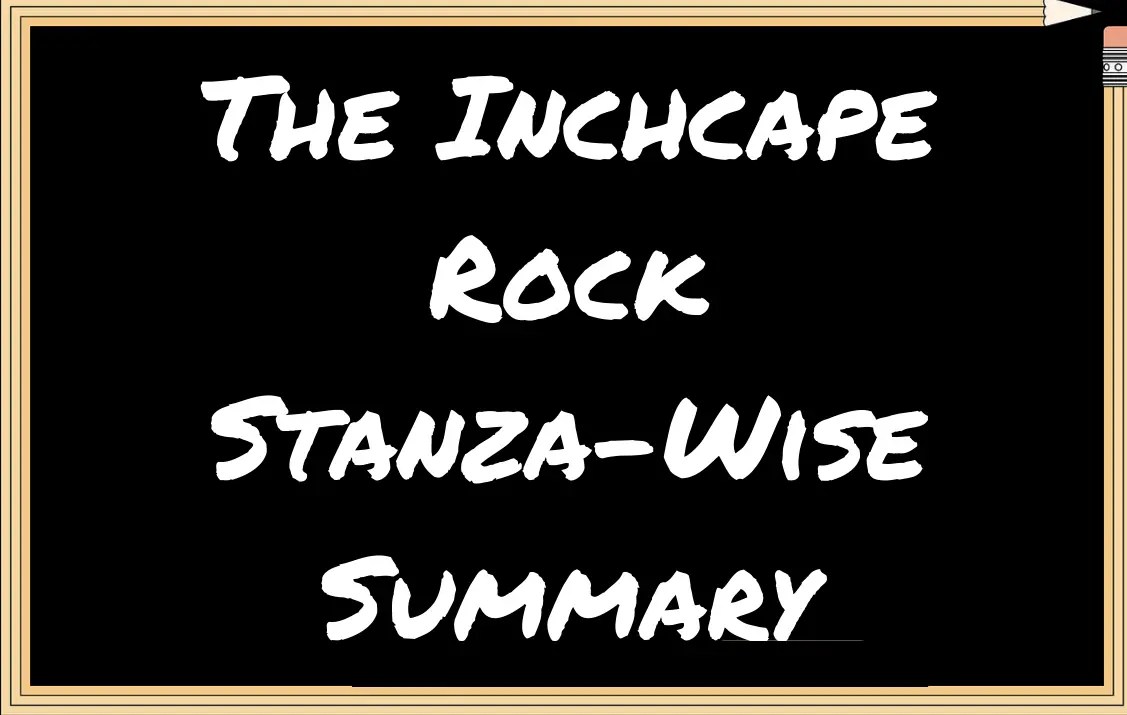 ‘The Inchcape Rock’ by Robert Southey is a ballad and was published in 1802. It is based on the rule of nature which says – As you sow, so shall you reap which means that man will definitely get the results of his deeds – good or bad in the future. Now, let’s see the stanza-wise summary. I have also shared the Ozymandias Stanza-Wise Summary so, you can check that post as well.

In the first stanza, the poet describes the calmness of the sea and sets the natural setting. The sea was calm and there was no movement in the air. That is why the ship stood still. The sails of the ship were not getting any thrust from the air and were erect. Its keel which is a metallic or wooden piece that offers support to the whole structure of the ship was also steady in the ocean.

“Without either sign………………..move the Inchcape Bell”

The second stanza describes the drowsy/mild sea waves. The ocean waves flowed over The Inchcape Rock very smoothly. The movement was so slow that it could make The Inchcape Bell ring. The waves were not rising up high to hide the dangerous Inchcape Rock and had no power to rock the bell. Therefore, the bell could not make any sound.

Must Read: Stanza-Wise Summary Of The Man He Killed

The word Abbot means the head monk in a monastery. The Abbot of Aberbrothok was a spiritual man and he was knowing the danger posed by the submerged rock for the passing ships. A collision between the keel and the rock could made the ship to sink. His intention was to warn the sailors about a possible collision so, he positioned a large bell atop a buoy and had it anchored to the rock with a chain. During the storms, the seamen could not see the rock as it stayed hidden under the high waves. These waves relentlessly rocked the bell back and forth and the sound from it reverberated all around warning the passing ships to steer clear of the rock thereby averting disasters. Mariners used to praise and bless the Abbot for this kind act of placing the warning device on the rock.

In the above stanza, the poet describes a cheerful atmosphere. It was very sunny and bright. The sun was shining in the sky and making the other creatures on planet earth happy. That particular day, everything looked so joyful. The sea-birds were whirling over the sea and screaming to express their happiness while there remained certain buoyancy in the step of the ship’s men.

In this stanza, Sir Ralph is introduced for the first time. On that fine day, the anchored floating sign (buoy) was clearly visible as a blackish spot in the green ocean. The Captain of the ship, Sir Rover stood on the deck of his vessel and at the dark spot of the buoy.

This stanza describes Ralph’s thoughts and feelings. The magic of the cheerful weather gripped his mind and he felt unusually joyous. He was making whistling sounds and singing in delight as his heart swayed in joy. However, this joy was not pure and got generated from his wickedness. He had something devilish in his mind.

The devilish thoughts lurking inside the dark mind of the captain made him to cook up a very nasty plan. His intentions were to destroy the good work of the Abbot by destroying the bell and wreak havoc on the passing ships with the hidden treacherous rock.

Must Read: Questions & Answers Of The Emergence Of Zoo

Must Read: The Lady With The Lamp Questions & Answers

The captain ordered his men to lower a boat and hopped on it so as to get close to the buoy to uproot it.

As soon as Ralph cut the rope, the bell of Inchcape sank down into the deep water creating a gurgling sound causing bubbles to rise and burst on the surface. Deriving immense pleasure from what he did, he felt satisfied that the bell would save no more ships and the seamen would no longer bless the Abbot.

Proud of his deed, Sir Ralph set the sails on a new journey across many seas and over many days. He was a pirate and robbed many ships which met accidents crashing to the Inchcape Rock and became a rich man. After collecting enough treasure and booty, he was heading back to the Scotland shores.

The day when Sir Ralph was returning turned out to be dark. The thick fog filled atmosphere spread far and wide making the sun invisible. The strong winds that were blowing throughout the day, seized in the evening.

Sir Ralph stood on the deck but couldn’t see the land due to the foggy atmosphere. The crew was panic-stricken but Ralph assured them that there would soon be some light in the sky as the moon was about to appear.

One of the crew members said that he could not locate the position of the ship and coastland as the waves were receding into a mute conspiracy. He was also lamenting that there was no Inchcape bell to warn them of the nearing rocky coast and to easy their fears.

The sea got more turbulent and feisty and they could hear no sound as there was no alarm bell ringing. The wind also dropped to a standstill and the ship was now in the grip of the waves and they continued rowing here and there. Suddenly, the ship got the jerk and they understood and uttered in disappointment that their vessel had hit the Inchcape Rock.

The Rover, Sir Ralph in frustration pulled his hair and cursed himself for his evil deeds. He fell into a pit of his own making and the rock turned into his tombstone. Meanwhile, the water started rushing-in from all sides and started sinking the ship.

As the ship was sinking down in the sea, Sir Ralph heard a sound like that of the Inchcape Bell that seized him with terror. It was actually his death knell that the Devil himself was ringing beneath the water reminding him of his approaching death due to his misdeeds done.

So, this was the stanza-wise summary of The Inchcape Rock.