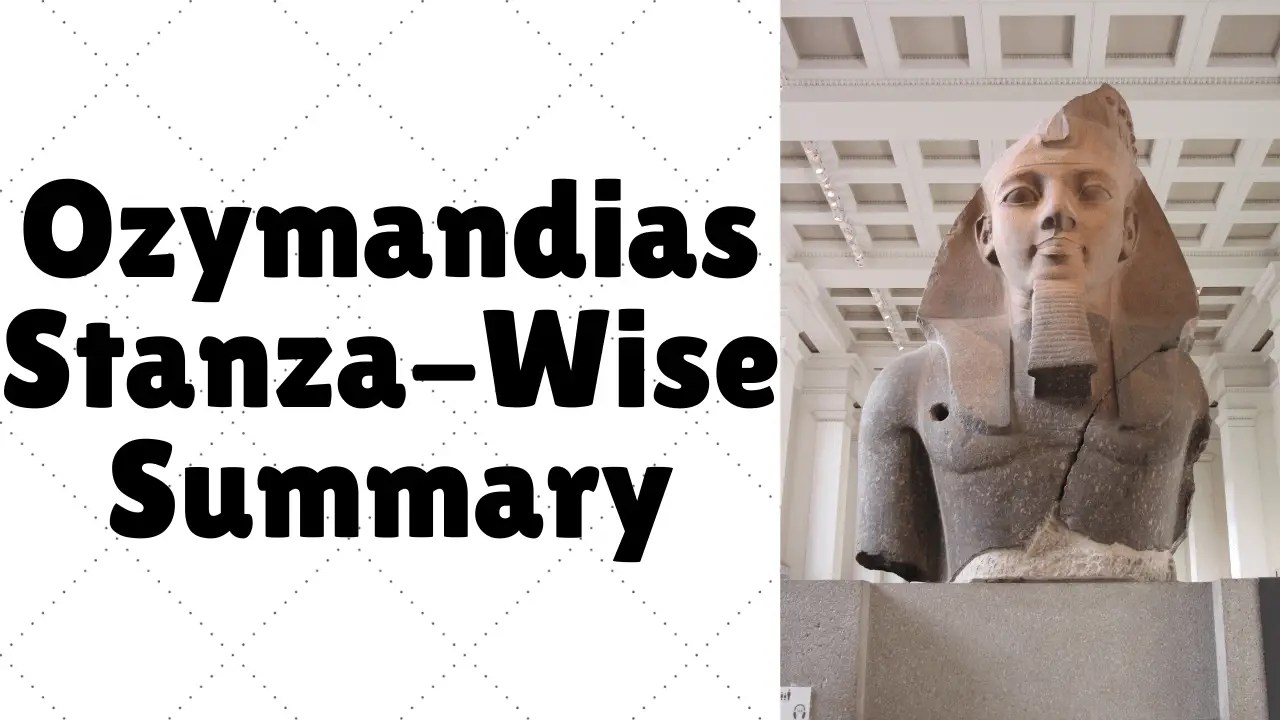 ‘Ozymandias’ by Percy Bysshe Shelley is a sonnet and was published in 1818. It discusses the nature of humans and depicts how short-lived pride is. This poem also focusses on the fact that nobody can beat time. Rulers forgot this fact and considered themselves mighty and eternal.

This poem talks about Ozymandias, a Greek name for the Egyptian Pharaoh Ramesses II. He considered himself to be the greatest and mightiest ruler. But, he had to die eventually and now, there is nothing left except his broken statue. Now, let’s see the stanza-wise summary. In one of my previous posts, I have also shared the stanza-wise summary of the poem – The Inchcape Rock so, you can check that post as well.

The first stanza begins with the poet mentioning that he meets a traveler from an antique land. As mentioned above, Ozymandias is the Greek name for the Egyptian Pharaoh Ramesses II. Here antique land refers to old Egypt.

The traveler tells the poet about an old and broken sculpture. According to him, there were two big (vast) legs of stone standing in the desert without the upper body (trunkless).

Near the legs, was a broken head or face (visage) of the sculpture which was half-buried in the sand.

The traveler now describes the appearance of the face. It had a frown and wrinkled lips on its face indicating displeasure and anger respectively.

The sneer of cold command is the next expression of the sculpture described in the poem. Sneer meaning disgust and cold command describing the harsh commands given by the ruler.

Thus, collectively sneer of cold command refers to the uncaring attitude, ego, harshness and haughtiness of the ruler. According to all the above expressions, he is thought to be very revengeful, boastful and full of ego who considers himself to be the superior of all.

Must Read: Questions & Answers Of The Emergence Of Zoo

According to the poet, the expressions of Ozymandias have been engraved so perfectly and nicely by the sculptor on the lifeless stones that they portray his nature.

The skills in his hands helped him portray the expressions and his heart inspired him to carve out those expressions perfectly on the face of the sculpture.

These words were engraved on the pedestal (bottom) of the sculpture – My name is Ozymandias, King of Kings: Look on my works (achievements in war and expanding his empire), ye Mighty (the Mighty), and despair (fear from me)!

The words on the pedestal represent Ozymandias’s nature very vividly. He was a powerful ruler and proud of his might. He made all others bow before him.

This stanza tells that there is nothing left now, that is, Ozymandias is no more, his ego is one, his might is gone and his empire is not there. What remains now is the colossal wreck i.e. the broken sculpture of Ozymandias.

Only the broken, destroyed and ruined sculpture stands alone in the never-ending sand spread all over the desert.

Must Read: The Lady With The Lamp Questions & Answers

So, this was the stanza-wise summary of Ozymandias.