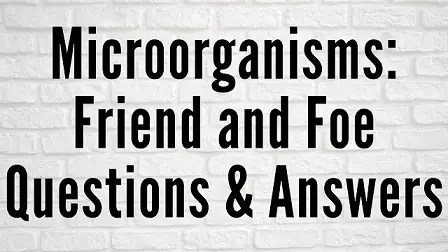 Hi Everyone!! This article will share Microorganisms – Friend and Foe Questions & Answers.

Question 1: What are micro-organisms? State the groups in which they are divided.

Answer: Organisms which are not visible to our naked eyes are called micro-organisms.

• They are generally divided in the four groups: bacteria, algae, fungi and protozoa.

Question 3: Why are viruses not classified with other with other living organisms?

Answer: Viruses not classified with other with other living organisms as they can reproduce only inside a host cell.

Question 5: Classify bacteria on the basis of their shape.

Answer: There are four main types of bacteria depending on their shape.

These are round in shape and are also called cocci (singular – coccus). For example – staphylococcus, streptococcus

Such bacteria are elongated in shape and are called bacilli (singular – bacillus). For example – E.coli, lactobacillus, salmonella

These bacteria are also known as vibrios (singular – vibrio). For example – Vibrio cholerae

Such bacteria are spiral in shape and are called spirilla (singular – spirillum). For example – Spirillum minus

Question 6: What are flagella?

Answer: These are the locomotory structures present in bacteria that help in locomotion.

Question 7: What is capsule and what is its function.

Answer: Capsule is a slimy coating present on the outer surface of some bacteria. It offers protection to the bacterium.

Question 8: On the basis of oxygen requirement, classify bacteria.

Answer: On the basis ofoxygen requirement, bacteria can be classified into two types:

1. Aerobic Bacteria – They need oxygen for respiration and cannot survive in its absence.

2. Anaerobic bacteria – They do not need oxygen for respiration.

Question 9: How do bacteria reproduce?

Answer: Bacteria mainly reproduce by the asexual mode of reproduction which is binary fission in which one parent cell divides and gives rise to two new daughter cells. Most bacteria have a very short life cycle. Some bacteria may divide every 10 minutes to give rise to new daughter cells under suitable conditions.

Question 10: Why are viruses considered neither dead nor alive?

Answer: Viruses are neither considered as living nor dead because they can only grow and reproduce inside a host cell and do not show any signs of life outside the cell. They are inactive outside a host cell but once inside they multiply very fast and may sometimes even kill the host cell.

Question 11: What are bacteriophages?

Answer: The viruses that infect bacteria are called bacteriophages.

Question 13: What are algae? Give some examples.

Answer: The green scum that is found in moist places such as ponds, lakes, on the walls and rocks are called algae. For example – Chlorella, Spirogyra, Volvox, Chlamydomonas.

Question 14: Classify algae on the basis of the colour of the pigments.

Answer: On the basis of the colour of the pigments, algae can be classified into three types:

Question 15: How do algae reproduce?

Answer: Algae show both the modes of reproduction – sexual and asexual. Asexual reproduction is by fragmentation and binary fission.

Question 16: Describe the structure of a fungus.

Answer: The main body of most fungi is made up of fine, branching, and usually colourless threads called hyphae. These thread-like structures are collectively called mycelium. Sporangia are present at the top of each hypha that produce spores for reproduction. These spores are very light in weight and thus spread very fast through the air. Most fungi have root-like structures called rhizoids.

Question 17: Give any two characteristics of protozoa.

Question 18: Explain the role of microorganisms in keeping the environment clean.

Question 19: Write a short note on use of microbes in the food industry.

Question 20: Write a short note on chemical preservation of food.

Question 21: Why does idli batter take a longer time to ferment during winter?

Answer: Idli batter is the mixture of Urad dal and Rice that needs to be fermented overnight. For the fermentation process to take place, the microorganisms need normal room temperature to grow. In winter season the temperature is low that is why it takes a longer time for the batter to ferment.

Question 22: What is single-cell protein?

Answer: Proteins extracted from single-celled algae, fungi, bacteria and yeasts are used as protein supplements in animal and human needs. This type of protein extract is known as a single-cell protein.

Question 23: Give two examples of fermentation.

Answer: Making of vinegar, wine & alcohol and the formation of curd are examples of fermentation.

Answer: Microorganisms from air and water start growing on food and lead to food spoilage. They need moisture, nutrients and temperature for the growth. Food spoilage also occurs due to improper cooking and mishandling while storage.

Question 25: What are the indicators of food spoilage?

Answer: The methods of food preservation are:

Question 27: What is pasteurization?

Answer: Pasteurization is a process in which milk is first heated to a high temperature for about 30 minutes and is then cooled to a lower temperature. The heating kills microorganisms and freezing prevents the multiplication of bacteria.

Question 28: Nidhi purchased a bread packet from the market and ate half of it on the same day. She went out of town for the next two days. She forgot to keep the bread packet in the fridge before going. After coming home, she observed that the bread had a black and white cottony growth on it.

(a) Why was there black and white cottony growth on the bread?

Answer: As the bread was left outside the fridge, fungal spores present in the air started growing on the bread forming a black and white cottony growth.

(b) What can be learnt from Nidhi’s experience?

Answer: Food material that is not in use should be stored properly to avoid spoilage by microorganisms.

Question 29: In the following questions, two statements are given- one labelled Assertion (A) and the other labelled Reason (R). Read the statements carefully and choose the correct alternative (A), (B), (C) and (D) as given below.

(A) Both A and R are true and R is the correct explanation of the assertion.

(B) Both A and R are true but R is not the correct explanation of the assertion.

1. Assertion: Viruses do not have a cell wall, cell membrane, nucleus and other cell organelles.

Answer: Diseases that are transmissible from one person to another by direct contact with an infected individual, the individual’s discharges or by indirect means (such as a vector) are called communicable diseases.

Answer: A vaccine is a biological preparation that improves immunity to a particular disease by producing antibodies against the disease-causing microbes.

The process of introducing the weakened microorganism or their extracts artificially into the body is called vaccination.

Question 33: One must wash his hands before eating food, why?

Answer: Washing hands before having food is one of the easiest and effective measures for preventing infections. When we eat without washing our hands, the bacteria and germs present on our fingers and palms can get transferred to our mouth thereby causing diseases and infections.

Question 34: We should avoid eating outside or roadside food during monsoon. Give reasons.

Answer: We should avoid eating outside or roadside food during monsoon because there is a high probability of water contamination during rains due to floods and water logging. Moreover, moist environment is most ideal for microorganisms’ growth. Monsoon season is also a breeding season for carriers such as flies and mosquitoes.

So, these were Microorganisms – Friend and Foe Questions & Answers.